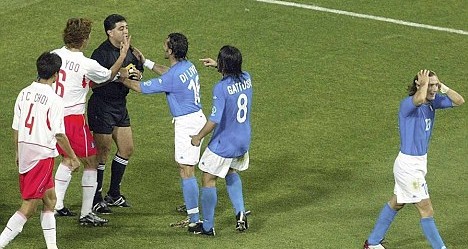 There are some things in football that I am still shocked by. Some things that occur that I just cannot get my head around and come to terms with. No matter how many years pass I always reflect on them with wonder. Fernando Torres’ decision to leave Liverpool for £50m is one of these, and so too is the 2002 World Cup. In particular the games in the knockout round between Italy and South Korea, and Spain and South Korea.

These games have been given the title of the fourth “Biggest Controversy In World Cup History” by Bleacher Report , one earned a place on ESPN’s 10 most controversial World Cup moments, and also featured on MSN’s “10 Worst World Cup Refereeing Decisions“. They quite rightly deserve all of this.

South Korea had advanced due to finishing top of their group, which contained Poland, USA and Portugal, and were presented with a second round match against an Italian team that had only managed to finish in second place, missing out on top spot to Mexico. The two teams met on the 18th of June and one of the greatest controversy’s in sport was born.

South Korea were the co-hosts of the tournament and many had not expected them to even get out of their group, so when Italy came along the fans were not overly optimistic. Italy had been having a torrid time of things themselves, after having four perfectly legitimate goals disallowed in the group stages, they felt as though there was a conspiracy against them. This feeling only intensified following the South Korea game.

Four minutes into the game South Korea were awarded a penalty by the Ecuadorian referee Byron Moreno. Though this was probably the correct decision, it was a sign of things to come for Italy. Buffon managed to save the spot kick, and Italy took the lead through Christian Vieri fourteen minutes later, but that was as good as it got for them.

Garry Pasarella had this to say about the remainder of the game; “As [it] wore on Korean frustrations began to boil over. Del Piero received a clear elbow to the face which went unpunished. Totti was repeatedly the subject of foul play, with the referee doing little to protect the Italian ‘trequartista’. Zambrotta was flattened with a horrific lunging tackle above the knee that could easily have resulted in a broken leg, again the referee took no action. Totti was denied a penalty for a blatant foul that may or may not have been inside the box. Maldini received what looked like a deliberate kick to the head while on the floor, the referee again waved play on”.
As the final whistle drew near, South Korea equalised, sending the game into extra time.

In the first half of extra time Italy were reduced to ten men because the referee gave Francesco Totti a second yellow card for diving. Replays show that there was clearly contact made by the defender, and though it was not a foul, it certainly wasn’t a dive either. The second half of extra time came round and ten man Italy had the ball in the back of the net. This though, was not the winner, as once again it was ruled out, becoming the fifth goal Italy had had disallowed at the tournament. In the 117th minute South Korea scored the golden goal, knocking Italy out of the tournament.

Following that game 400,000 emails were sent to FIFA complaining about the officials decisions. This electronic bombardment led to the server crashing under the weight of incoming mail. The controversy however, did not end there. In the very next South Korean game, a Quarter Final tie against Spain, the roar of a pro-South Korean conspiracy became deafening. Paul Hayward, a journalist for The Telegraph at the time said the tournament had become a “farce”.

Spain twice had the ball in the back of the South Korean net, only for the officials to rule them out. By that point five goals that had been scored against South Korea in the tournament had been disallowed. Concerns about the quality of officials became more noticeable and Spain joined Italy in their cries of conspiracy. Sepp Blatter, the FIFA President, was even forced to admit that there was a problem with match officials. Nonetheless, the 150-1 outsiders, South Korea, advanced to the Semi Finals after winning on penalties.

Both Spanish and Italian media, public, and football teams, were convinced that something was not right. Spain’s leading sports daily Marca ran the headline “Robbery”, and statisticians looked at the chances “of one team benefiting from five errors by officials in almost consecutive games”, finding it to be ‘infinitesimal’. The Telegraph accused South Korea of being like their communist neighbours in the North after “Korean TV airbrushed out the many outrages from” the two games. Though FIFA denied any plot, the accusation grew in credibility; officials were favouring South Korea in a bid to advance Asian football.

Just three months after the Italy and South Korea game, referee Byron Moreno was embroiled in another scandal, this time in his native country of Ecuador. After refereeing a game in Quito, the capital, Moreno was suspended for twenty matches and investigated by FIFA. At the time of the game Moreno was a candidate for Quito city council and when the home side were trailing 3-2, he decided to add thirteen minutes of injury time. In this time the home side scored twice, and subsequently won the 4-3. Three games after returning from suspension Moreno was suspended once again for sending three players off from a visiting team in a 1-1 draw. If that wasn’t enough in September 2010 Moreno was arrested and sentenced to two and a half years in prison for smuggling heroin into the USA.

Though not quite as colourful a story as Moreno, Gamal Al-Ghandour, the referee in the Spain and South Korea game, also adds weight to the conspiracy theory of a pro-South Korea bias amongst the officials. Following Spain’s exit from the World Cup tournament, Al-Ghandour decided to retire. The controversial Quarter Final he officiated was his last ever after making a decision to step away from the game once Spanish “newspapers accused him of accepting a Hyundai car as a “gift” on behalf of the Korean Football Association”.

Though a pro-South Korean plot has never been proven, it doesn’t half make for an interesting back story. If you have a spare hour or two I highly recommend you go to YouTube and revisit the World Cup of 2002 for yourself. Although fairly grainy, this is my favourite video, the dramatic music only adds to it. The video is called “Corea Compra Los Arbitros”, which roughly translates as “Korea Bought The Referee”.